The properties damaged by DUIs in Los Angeles can include everything from vehicles to homes to businesses and retail establishments. Sometimes a DUI driver will take out a neighborhood landmark, destroying a bar or a restaurant that’s a favorite with locals. 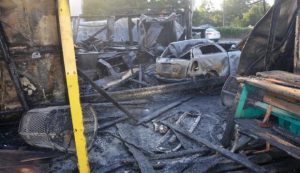 Residents and regular visitors to Dewey Beach, Delaware, are mourning the destruction of Ed’s Chicken and Crabs by a DUI driver. A 2013 Mini Cooper driven by Michelle Small, 36, of Wyoming, Delaware, slammed into the popular summer take out restaurant, hitting a propane gas tank and igniting a fire that soon engulfed the building.

A video camera on a nearby building recorded the entire incident, which occurred around 2 a.m. The video shows Small’s vehicle traveling southbound at a high rate of speed along Route 1 (the Coastal Highway). The car crosses over the median strip, goes about a half block the wrong way in the north lanes and then crashes into the restaurant.   END_OF_DOCUMENT_TOKEN_TO_BE_REPLACED

Even when no one is injured, drivers involved in crashes related to DUI in Los Angeles can impact the lives of others in a fairly significant way. When an out-of-control motorist crashes into a home or another car, for example, the owners of those homes and vehicles have to spend time (and sometimes their own money) to repair the damages before they can resume their daily activities. 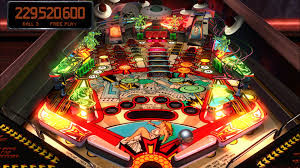 A man in East Windsor, Connecticut, has made life a little more difficult for no less than seven people—owners of the vehicles that he hit while allegedly driving under the influence on one Tuesday in May.

According to FOX CT, Jordan DeSousa, age 61, hit seven cars in two separate locations before police found him sitting behind the wheel of his pickup truck. DeSousa first smashed two cars in parking lot for Geisler’s Plaza, prompting numerous emergency calls to police. Even as they were responding to that scene, however, officers received reports that a truck had taken out another five vehicles in the parking lot of the next door merchant, Maine Fish. DeSousa, who was identified by witnesses, apparently caused so much damage to four of the vehicles that tow trucks had to haul away them away.

It could have been much worse, however; three people standing close to their vehicles jumped out of the way in time to avoid being struck.

DeSousa, who reportedly was drinking because his wife had just announced she was leaving him, had a blood alcohol content three times the legal limit. He faces charges of DUI, evading responsibility, reckless driving and reckless endangerment.
Do you or a family member need insight from a qualified Los Angeles DUI attorney? Contact Michael Kraut of the Kraut Law Group to set up your free consultation.

END_OF_DOCUMENT_TOKEN_TO_BE_REPLACED

Most Los Angeles DUI incidences don’t make the news because they are mundane and commonplace. Cases involving celebrities, politicians, athletes, etc., do get media attention, but some of the most interesting cases are also the most bizarre events. 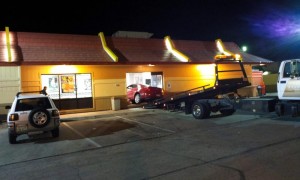 The first occurred in Urbana, Illinois, when 47-year-old Leslie Srajek allegedly drove her car into McDonalds. No, she didn’t use the drive-thru to order food. She literally “drove through” the restaurant, knocking over a booth and a table as she tried to extract her vehicle.

Rescue workers took her to the Carle Foundation Hospital, and authorities later hit her with charges of driving without license and DUI. She faces a court date on May 16th. Her Honda Coupe was destroyed in the crash.

Kate Garbacz, an eyewitness, described what happened in detail: “The Honda was close to a stop, then [Srajek] gunned it and crossed into the McDonald’s parking lot entrance and accelerated quickly… It looked like [she] accelerated, cut the wheel, no slowing, no attempt at stopping, just boom, straight in … She went over that parking hump and the sidewalk and literally took out that whole wall. The car was three-quarters of the way into the dining room.”

Fortunately, no one in the restaurant was injured.

Meanwhile, out in South Dakota, a local man named Heith Jibben lost control of his vehicle while drag racing another driver on a local road. During the “race,” Jibben’s Taurus hit a white SUV, causing the car to flip over three times, like something out of The Dukes of Hazzard. Authorities took the SUV driver to the hospital: fortunately, he suffered non-life-threatening injuries. Jibben reportedly tested at a BAC level of 0.167 percent – that’s more than double the legal limit in SD and here in Southern California.

In Los Angeles, if you are convicted multiple times of DUI within a 10 year period, your punishments can become quite intense. For instance, a first time offender (for a misdemeanor) may face just a few hours to a few days behind bars. A third time offender, meanwhile, can face up to 180 days behind bars (minimum); and prosecutors can even ask that what normally be a misdemeanor charge be elevated to a felony charge.

For help understanding what to do to construct a defense to your Los Angeles DUI charges, call attorney Michael Kraut of the Kraut Law Group. Mr. Kraut is a former city prosecutor (senior deputy district attorney) with close relationships with many people in the Southern California justice community. Mr. Kraut can advise you effectively and help you develop a strategic plan.
END_OF_DOCUMENT_TOKEN_TO_BE_REPLACED