Last Sunday, residents of the sleepy town of Danville witnessed a shocking multiple hit and run Southern California DUI rampage involving Cainan Schierholtz, the brother of Nate Schierholtz, an outfielder for the San Francisco Giants. All told, the 23-year old Schierholtz allegedly hit a bicyclist, a pedestrian, and several cars and trucks before he was stopped. 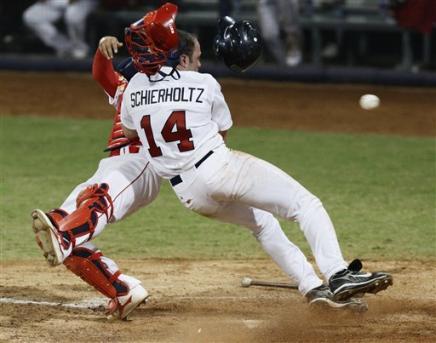 Diagram of a Rampage
The insanity began around 10 in the morning on Sunday, when police officers heard a report that someone was driving DUI near Railroad Avenue and Danville Boulevard. Schierholtz by that time had probably already hit his first victim – a bicyclist on Danville Blvd. Rather than stop to help the bicyclist, Schierholtz continued forward and rammed into a pedestrian. Again, he did not stop and instead swerved into another lane and slammed into a pickup truck. Again, he didn’t stop. He pulled onto Linda Mesa Avenue and smashed into a Lexus SUV. Meanwhile, the driver of the pickup followed him onto Montair Drive.

The suspect was cornered on that dead end street and blocked by the pickup truck. He was at that point driving with his airbags deployed (but still managing somehow to move forward). But because the pickup truck blocked him, he got stuck. The pickup truck driver and local neighbors surrounded and subdued him before police got to the scene and arrested him.

Schierholtz was held on $350,000 bail and charged with multiple counts of Southern California DUI causing injury, three counts of injury hit and run, and two counts of property damage. And to top it off, the 23 year old was charged with driving without a license.

Fortunately, no one appears to have been severely injured during the rampage. But Schierholtz faces a huge legal battle. According to California Vehicle Code Sections 23153 (a) and 23153 (b), a typical count of Los Angeles DUI can be elevated to a felony if a driver under the influence causes injury to another person. Felony charges are more serious than misdemeanors. If you are convicted of a felony, for instance, you will lose your right to vote, and you may find it very difficult to get loans, find employment, and qualify for a lease on a car or an apartment.

If you are arrested for a DUI in Glendale or DUI in Pasadena and charged with injuring someone while under the influence, you will need to put together a strategically engineered defense. Depending on the circumstances, you could try to get the charges dropped altogether. In other cases, you may seek to plea bargain down the charges. For instance, in exchange for prosecutors not charging you with injury DUI in Pasadena, you might accept a lesser charge of a simple Los Angeles DUI, pursuant to California Vehicle Code Sections 23152 (a) or 23152(b).

In any event, chances are that you need a time tested attorney on your side to advise you and suggest a strategic way forward.

Attorney Michael Kraut of Hollywood’s Kraut Law Group has ample experience both as a prosecutor and a criminal defense attorney. Attorney Kraut is a compassionate, Harvard Law School educated lawyer who actually worked for over a decade as a criminal prosecutor. He uses his accrued wisdom and contacts to put together smarter defenses for his clients.