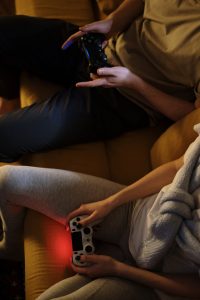 Video games have fascinated us ever since they were invented. In an age where these games are becoming more and more sophisticated and realistic—and frequently violent—a gnawing question is resurfacing in the public debate, especially considering the spike in both domestic and mass violence in recent years. Is there a link between violent video games and an increase of real-world violence? Or, to put it closer to home, if you play violent video games, are you more likely to commit domestic battery toward your spouse or partner?

This is a question that has been debated for many years, with no clear answer. Some people believe that playing violent video games can desensitize players to the horrors of violence, making them more likely to commit acts of violence themselves, both in and out of the home. Others argue that there is no evidence to support this claim and that playing violent video games does not cause people to act violently in real life. The argument plays out everywhere, from coffee shops to Congress.

So, what do the experts say? Unfortunately, there is no clear consensus. Some studies have found a correlation between playing violent video games and increased aggression, while other studies have found no such link. It is difficult to say definitively whether or not there is a causal connection between playing violent video games and committing acts of domestic violence. Nevertheless, let’s take a closer look at this question to see what we can learn.

A Summary of the Studies

We should mention at the start that to date, no study on the effects of video games on our minds has yielded conclusive results. Even the studies that claim video games encourage violence show limited supporting evidence because there are so many other possible factors at work. In other words…to say definitively that video games do or do not cause violence is oversimplifying the issue. This is because a) the human mind is complex, and b) every human mind is unique. There are just too many variables at any one time, and that’s why the studies cannot seem to agree. (If you’re interested in looking at specific studies, here’s a synopsis of studies on both sides of the issue.)

That being said, there have been enough studies by this point that we can at least draw a few baseline conclusions. There’s a lot we still don’t know, but here are a few things we can say with reasonable confidence:

Among all the conflicting results of the studies as to whether video games can encourage violence, at least one study concludes that the risk of real-world violence might actually decrease after playing violent video games. While this study isn’t enough to make a definitive statement, the fact remains that some people have suggested that for them, playing a violent game serves as a sort of cathartic release for pent-up anger and rage. It may not be true for all people, but for some, it’s plausible that expressing violence in the virtual world may deter them from acting out that violence in the real world.

What It All Means for You

So what if you’ve been arrested recently on accusations of domestic violence? If you’re a gamer, can you blame the violence on too many video games? Not likely. The studies just don’t support that claim, and it’s certainly not a defense that would hold up in court. However, it’s worth paying attention to your own inner feelings. After you play violent video games, do you feel like you are more of a threat to your spouse or partner? Do you feel more likely to lash out at them? Or does playing a video game make you feel calmer? If you do have other risk factors for domestic violence (e.g., substance abuse, anger, or mental health issues), it’s possible that the games may exacerbate those underlying problems. In that case, you might want to consider restricting your gameplay and getting help for those underlying issues.

With what little we know about the effects of violent video games (and the large part that we don’t know), we can conclude the following:

Regardless of the triggers involved, or even whether the accusations are false, it’s important to have compassionate legal counsel on your side when navigating domestic violence charges in Los Angeles. Call our offices today for an appointment.