A new technology introduced by the DADSS program (the Driver Alcohol Detection System for Safety) holds the potential for eliminating arrests for DUI in Los Angeles and all over the country. 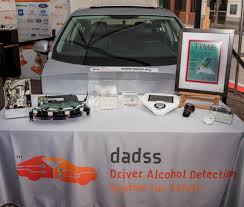 DADSS is building prototypes of an alcohol detection system (ADS) that would prevent a car from moving if the blood alcohol content of the driver exceeded 0.08. That’s the legal limit in all states. DADSS is experimenting with two types of technology to determine BAC. One is a breath-based system that automatically measures the alcohol level in a driver’s exhaled breath. (No breathalyzer needed.) The DADSS website said the technology would “accurately and reliably distinguish between the driver’s breath and that of any passengers.”

The second technology DADSS will be testing is a touch-based system. This measures blood alcohol levels under the skin’s surface by shining an infrared-light through the fingertip. DADSS said automakers could integrate this system into a vehicle’s start button or steering wheel, making it possible to take multiple accurate readings in less than a second.

The National Highway Traffic Safety Administration (NHTSA) and the Automotive Coalition for Traffic Safety (ACTS), which represent automakers, have formed a public/private partnership to sponsor the DADSS research. Their plan is to make the ADS an optional safety feature on vehicles, like automatic braking and lane departure warnings.

If and when the ADS technology becomes commercially viable and available to car buyers, it could help save some of the 10,000 lives lost to DUI incidents each year.