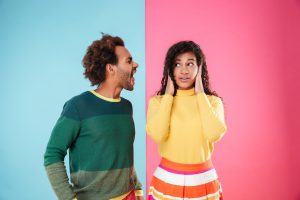 If you want a tongue-in-cheek look at how public attitudes about domestic violence have changed over time, take a couple of hours and watch the classic film The Quiet Man (1952), starring John Wayne and Maureen O’Hara. Set in rural Ireland, this John Ford film takes a humorous (but admittedly politically incorrect) look at the volatile dynamic in husband-wife relationships. It’s almost jarring today to see the various ways the characters in the film “wink the eye” at domestic violence in the movie. At one point during the main characters’ courtship, their chaperone quips to O’Hara’s character, Mary Kate: “Have the good manners not to hit the man until he’s your husband and entitled to hit you back.” During the climax of the film, while Wayne’s character Sean Thornton hauls Mary Kate by arm across the Irish countryside with a crowd following, one of the villagers courteously hands Thornton a stick “to beat the lovely lady.”

Perhaps just as telling is Maureen O’Hara’s description of what happened to her behind the scenes while shooting the film. In a noteworthy commentary, O’Hara claims she literally broke her wrist when John Wayne blocked a punch during one scene, and she had to finish the scene in piercing pain. She also claims that during the climactic scene described earlier, her character was supposed to stumble and have Wayne drag her face-first through the dirt—except that Wayne and the director had filled the spot with sheep dung as a “practical joke.”

While these antics (both on and off-screen) would be considered completely inappropriate today, they underscore how much public views of domestic violence have changed across several generations. In truth, domestic violence has been a blight on human culture for many centuries—the main thing that changes is how permissive society is toward it. Looking back just a few decades, it can be surprising to see how much women, in particular, were subjected to in earlier times, and how much they were simply expected to put up with as “the way things were.” Even our grandparents and great-grandparents likely had a different view of domestic violence than we do today. Let’s launch into a deeper look at how earlier generations looked at this issue in Western culture (i.e., Europe and the Americas), both to see how far we’ve come and what we may have yet to learn.

It might surprise many of us to realize that it wasn’t until the late 1800s that people began to view domestic violence as a black mark on society, and the laws began changing in kind to reflect that truth. As late as the mid-nineteenth century, wife-beating was not only legal in most places, but considered an acceptable social norm as the husband’s “right” over his wife. Throughout the 1800s, a growing swell of opposition to this practice eventually made its way into the law books. In 1850, Tennessee became the first state to outlaw wife-beating; by 1920, it was illegal in all states.

Domestic Violence through the Mid-1900s

Despite the growing antipathy toward domestic violence, society itself doesn’t always change as quickly as the law does. While most places in America viewed DV as a crime by the early 20th Century, most police agencies were very reluctant to enforce it, doing so only as a last resort because they didn’t want to get involved with “family matters.” At the same time, many incidents of domestic abuse continued to go unreported for a variety of reasons. In some cultures, as spotlighted by The Quiet Man, it was still “winked at” as a fact of marriage. In others, the silence was motivated by a desire to protect the family from shame.

It would take more than 100 years after the first domestic violence laws were enacted in America before the public began demanding more widespread and stricter enforcement of those laws. Violence against women became one of several key platforms of the revived Women’s Rights Movement of the 1970s, and in it was in this movement that the term “domestic violence” was first coined as a description of spousal abuse in the home. Amid increasing public pressure to take the problem more seriously, law enforcement agencies started becoming more aggressive in making arrests and prosecuting these crimes. Sweeping reform came in 1994 with the Violence Against Women Act, which not only called for stricter enforcement and stiffer penalties for offenders but also expanded the scope of domestic violence from strictly physical violence in a marital relationship to include dating violence, sexual assault and even stalking. It was also during this time that law enforcement also began recognizing domestic violence against men—a much smaller subcategory, yet no less harmful to the victims.

Today, even in the early 21st Century, there remain some cultures on the globe in which, sadly, domestic violence is considered an acceptable norm. However, most nations today (including America) enjoy some of the most robust protections for DV survivors we’ve ever seen. A growing number of states (California included) have moved toward highly proactive protections for victims and strict penalties for perpetrators of violence. While it remains to be seen whether these measures are actually decreasing the incidents of domestic violence across the world, they do at least offer victims more protections and recourse—and they even offer perpetrators the opportunity to address their own issues and begin a path toward reform.

If you have recently been arrested on charges of domestic violence, you could be facing stiff, life-changing penalties if convicted. You need compassionate legal counsel to guide you through the process and make sure you’re properly defended. Give us a call today for a free case evaluation.