Last Wednesday, golf superstar and billionaire Tiger Woods smashed into a fire hydrant near his Orlando home, causing over $3,000 in damage, according to the AP. Although this was not a Southern California DUI accident, the blogosphere (and even the mainstream media) has jumped all over the story, in part due to salacious details emerging about Woods’ alleged affair with a cocktail waitress named Jamie Grubbs. The Orlando police released a six page accident report which included over 100 photos of Woods’ damaged Cadillac Escalade. According to the AP story, Woods’ vehicle “rubbed up against a line of bushes, crossed over a curb onto a grass median and into a row of hedges before swerving left into a hydrant and crashing into the tree.” 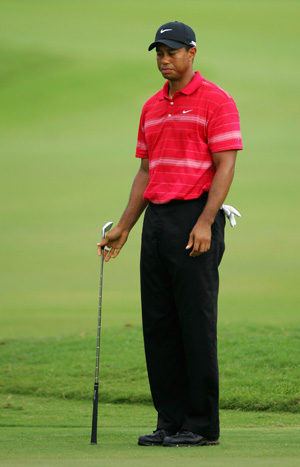 Woods has hunkered down — away from the public spotlight — after issuing a cryptic public apology about his “transgressions.”

Although Woods was not charged with DUI in Southern California — the incident, after all, occurred in Orlando, Florida, and the only charge was “careless driving” (which merited a flimsy fine of $164 and four points on his license) — the consequences for his endorsement career could be significant.

Prior to this incident and these allegations, Woods had maintained a relatively bulletproof public persona — that of a polite and thoroughly wholesome sportsman. Although police made no allegations that Woods had been drinking or otherwise intoxicated at the time of the crash, the golf pro did exhibit signs that could be construed as potentially indicating intoxication, at least according to the metrics used by California Highway Patrol officers. These symptoms of Souther California DUI include:

Many drivers exhibit these DUI-like symptoms independent of their level of alcohol intoxication. For instance, if someone gets physically sick or doesn’t get a lot of sleep, he or she can exhibit many if not all of the above symptoms. And certain medications can even make people smell like alcohol even though they’ve had nary a drop to drink.

All this is to say that defending a Beverly Hills DUI matter can become exceedingly complicated and technical. To that end, if you’ve been arrested for misdemeanor Los Angeles DUI, you may need a veteran attorney to represent you. Attorney Michael Kraut of the Kraut Law Group has been working in the Southern California legal system for over a decade — first as a prosecutor (Deputy District Attorney for Los Angeles) and now as a criminal defense lawyer. Since he’s worked on behalf of both sides, he brings a unique perspective to bear on each and every matter. And his deep understanding of how the prosecution operates often comes in handy when he develops strategic approaches for his clients.