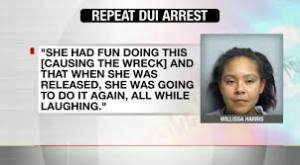 To defend against a Los Angeles DUI charge effectively — particularly if you actually committed a crime — you want to express remorse at the appropriate time. You need to show that you understand that what you did was dangerous and could have resulted in severe injuries or even the loss of life.

What you DON’T want to do is to brag that you are “going to do it again,” like Willissa Harris allegedly told police in Tulsa, after she smashed into a cable barrier on a local freeway, Highway 75. According to local media, after Harris hit the barrier, police helped her out of her vehicle and observed that she had red, bloodshot, glassy eyes and slurred speech – classic signs of DUI.

Per reports, Harris had been arrested twice prior for DUI, and she decided to chat with the police about her background on the way to the station. They recorded her apparently self-incriminating statements: she told police that she enjoyed “doing this” [causing the DUI wreck] and that she intended to “do it again.” Police took her to the Tulsa County Jail for processing.

Obviously, it’s no secret that people do and say very dumb things after being stopped for DUI – we’ve come back to this theme again and again on this blog. But there are limits to how and when you can self-incriminate. For instance, let’s say the police fail to read your Miranda Rights — these include the caveat that “anything you say or do can be held against you in the court of law.” If so, you can fight back against the charges by making the argument that the court shouldn’t consider any self-incriminating statements that you made because police didn’t remind you of your rights before you said them.

The court will assess your complete history, including both admissible statements that you have made and your actions. In Harris’s case, the fact that she has two DUIs under her belt will probably matter more than the fact that she boasted under duress that she was “going to do it again.”

If you or someone you love needs to defend effectively against a similarly complex suite of charges, please call an experienced Los Angeles DUI criminal defense attorney at the Kraut Law Group immediately to schedule a free consultation with highly respected former prosecutor Michael Kraut