Many DUI in Beverly Hills cases begin when an intoxicated celebrity drives way over the speed limit in a fancy car and gets nabbed by the police for his or her hubris. Well, All Star NHL Goalie Nikolai Khabibulin was arrested last week for doing just that, when he was cuffed near Scottsdale, Arizona. Here is the story: 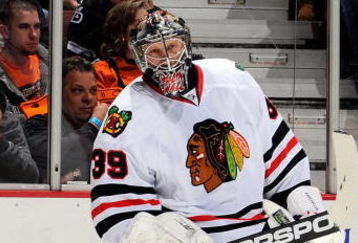 On February 8th, the goaltender blasted his red Ferrari down a Scottsdale road at 70 miles per hour — more than 25 miles per hour over the speed limit. Local police pulled over the 37-year-old and gave him a field sobriety test after noticing the odor of alcohol on him. Khabibulin was subsequently arrested and charged with DUI and speeding. According to the General Manager of the Oilers, “Nikolai has been fully cooperative with the authorities.”

Khabibulin, who signed a $15 million contract with the Edmonton Oilers in 2009, has been out since mid November thanks to a lower back injury. The Oilers have struggled without his finesse — racking up the worst record in the league (19-36-6). (For comparison, Khabibulin’s record was 7-2-9 with just over three goals scored against on average for the ’09-’10 hockey season.)

When police officers make DUI stops — whether they do so in Scottsdale or Southern California — what kinds of tests do they conduct?

The first kind of Southern California DUI field sobriety test usually given is the horizontal gaze nystagmus test. This is an eye exam designed to see whether the driver can track an object across a field of view. If the eye bounces around, this might indicate that the suspect is DUI.

The following test is the walk the line test. This is a balance test. A suspect must step nine paces in two directions over a line (such as a yellow dividing line). If she falls over, that might indicate she has been driving under the influence in Beverly Hills.

The next test is the one-leg stand test. This is another balance test. The driver stands on one foot for half a minute. Again, if he or she loses balance, this might indicate DUI.

The next test is the Rhomberg test, in which a driver tilts his head back and counts from 1 to 30. Again, a loss of balance might indicate DUI.
Officers can also employ coordination tests, such as the finger to the nose test.

Finally, mental coordination tests may be employed as well — such as reverse counting tests.

Just because you fail a Beverly Hills DUI field sobriety test doesn’t necessarily mean that you will be convicted. But you may need solid legal representation to help you build a good defense.

For able and effective help, turn to the Kraut Law Group. Head Counsel Michael Kraut is deeply familiar with the Southern California DUI process. As a Harvard Law educated former Senior Deputy District Attorney for Los Angeles, Attorney Kraut has both the perspective and the training he needs to provide clients with flexible strategic advice.