Last November, a man eventually charged with DUI in Los Angeles killed two people and injured several others when his car hit a minivan and then swerved onto a sidewalk. A similar accident—fortunately non-fatal so far—occurred in the District of Columbia on New Year’s Day. 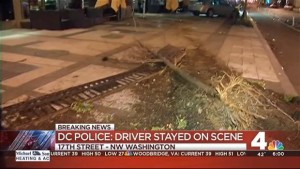 Twenty-five year old Malik Lloyd was apparently trying to turn from northbound 17th Street onto L Street in the early morning hours of January 1. Lloyd’s depth perception must have been off, however, because instead of making the corner he ended up skidding his car across the road, jumping the sidewalk and crashing into a floral planter and utility pole. His car continued down the sidewalk for several more feet, hitting seven people who were standing outside the “Bar Code” nightclub. Emergency crews took the victims to the hospital. Most were released, suffering only minor injuries, but one, the bar’s bouncer, was in critical condition the next day.

Lloyd took off after the accident, but police were able to catch up with him. They charged him with DUI, reckless driving and leaving the scene of an accident. The judge denied bond after prosecutors reminded her that Lloyd was already out on bond for a previous illegal gun charge. He is likely to remain in jail until his hearing on January 19th.

In California, under California Vehicle Code 20002, police could charge Lloyd with Hit & Run Causing Injury. (California law requires any driver involved in an accident to provide identification to any other driver or person involved in the accident before leaving the scene.) Prosecutors have some discretion in such cases; they can decide to try the case as a misdemeanor (with maximum penalties of up to a year in jail and up to $10,000 in fines) or as a felony (with maximum penalties of up to four years in jail and $10,000 in fines).