Last Wednesday evening, Jaime Pressly, a 33-year old actress best known for her role on the sitcom My Name Is Earl, got pulled over for a Los Angeles DUI in Santa Monica after police witnessed her committing a traffic violation. According to reports by TMZ.com, Pressly failed a field sobriety test and got taken to jail in Santa Monica. She was ultimately released on a $15,000 bail. Based on her high bail amount, some pundits speculated that — since Pressly had not been driving with minors and had not been involved an accident — she likely had an extremely high BAC level (over 0.15%). Police have not yet confirmed or denied this rumor. 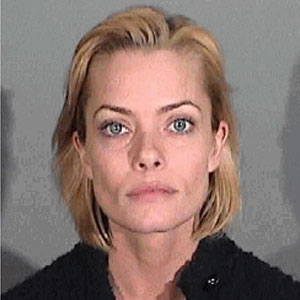 If someone you care about has been similarly pulled over for Beverly Hills DUI (or DUI in Pasadena, DUI in Glendale, DUI in Burbank, DUI in Los Angeles, or anywhere else in the Southland region) — likely, you feel some empathy with the actress, who appears clearly fatigued in her mug shot (see adjacent picture).

This is the first DUI charge Pressly has ever faced – and it marks a distinct downturn in her career from 2007, when she won an Emmy for Best Supporting Actress. After the 2009 cancelation of My Name is Earl, Pressly appeared in commercials for Axe as well as Rules of Engagement on CBS (as a guest star).

Let’s learn a bit more about Beverly Hills DUI field sobriety tests — tests similar to the ones that Pressly allegedly failed. Almost inevitably, your first test will be something called the horizontal gaze nystagmus test. This is a pupil reaction examination. An officer will flash a light in your eyes to determine whether your pupils respond normally. DUI drivers will tend to have a lagging reaction.

Next up on your docket, you will face mental and physical coordination tests. These include the “famous” FSTs you’ve likely seen on movies and cop shows. They include balancing on one leg (the one leg stand test), walk the line (where you pace back and forth across a line) and of course the finger to the nose test — where you close your eyes, stick out your hands and attempt to touch your nose with the tips of your fingers. Police may also make you do things like count backwards or say the alphabet backwards.

Police will also be looking for symptoms of Beverly Hills DUI, such as odor of alcohol on your breath or general discombobulation or uncoordination. Police may also ask you to submit to a preliminary alcohol screening (PAS) test. The breathalyzer is a machine that uses chemical analytics to determine your so-called blood alcohol concentration (BAC). If this number is greater than 0.08%, you can be arrested and charged with DUI in Southern California.

Whether you have been arrested for the first time in your life — like Jaime Pressly was – or you are facing a second, third, or other multiple charge, you need and deserve superior legal representation. Connect immediately with a Los Angeles criminal defense attorney to get a free consultation. Attorney Michael Kraut of the Kraut Law Group is at your service. Attorney Kraut is an experienced, Harvard Law School educated former prosecutor who has tremendous connections with those in Los Angeles DUI community and who has an excellent track record and compassionate, systematic approach to client defense.