Stories about celebrity DUIs in Los Angeles typically focus on the drivers who wreak havoc, hurt people, or say or do dumb things at checkpoints. 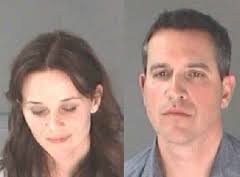 But that’s not always the case.

Consider the fascinating DUI arrest of CAA agent, Jim Toth, husband of actress Reese Witherspoon. On April 19th (as this Los Angeles DUI blog and other sources reported), Toth got stopped in Atlanta on suspicion of DUI. Witherspoon, who was in the car, made ridiculous, panicked statements to the officer — including accusing him of not being a “real” police officer – comments which got her arrested for attempting to intervene and disorderly conduct.

She has since profusely apologized.

She recently appeared on Good Morning America to talk about her new independent film, Mud. Host George Stephanopoulos brought up the DUI — and Witherspoon’s less than elegant comments to the officer: “You’ve been under the spotlight your whole adult life, and this doesn’t sound like the Reese Witherspoon we’ve grown to know.” Witherspoon agreed and said “I have no idea what I was saying that night. I saw him arresting my husband, and I literally panicked. And I said all kinds of crazy things. I told him I was pregnant. I am not pregnant. I am so sorry.”

Witherspoon said she particularly regretted the disrespect, because she has police officers in her family, and she works with police every day: “I know better. It’s just unacceptable.”

She also discussed how difficult it was to talk to her young children about the acts. She told Stephanopoulos “we are taking responsibility and doing everything in our power to make it right. You just have to be honest with them [her kids].”

The Oscar winning actress’s weird post-DUI behavior is not atypical.

In fact, lot of people arrested for driving under the influence in Los Angeles behave in ways they never imaged they could behave. Some people leave the scene of accidents — obviously a big no-no. Others lash out at police officers or break down emotionally.

In fact, many of the stories that we discuss here on this Los Angeles DUI blog are “newsy” because they highlight this tendency that DUI drivers often exhibit — to exacerbate problems after the fact. It’s bad enough if you get stopped at a Los Angeles DUI checkpoint and blow a 0.16% BAC on the breath test (twice the limit, per California Vehicle Code Section 23152(b)). It’s worse if you complicate the situation by punching an officer, driving away from the scene of the crime, lying, or engaging in other fishy behavior.

So why do people do this? Why do they metaphorically “throw good money after bad” – i.e., put themselves at risk for enhanced/additional charges for no reason?

This is a Los Angeles DUI blog, not a psychology blog. But undoubtedly our primitive brain is (at least to a degree) responsible. When we see threats in nature (be they saber-tooth tigers or police cars with flashing red lights), we engage in defensive behaviors: freeze, flight, or fight.

To unpack what’s happened to you and figure out the best way forward, connect with a Los Angeles DUI defense attorney at the Kraut Law Group. Mr. Kraut is an experienced and battle-tested lawyer who worked work many years as prosecutor (Senior Deputy District Attorney for LA).