Many major Southern California DUI stories pertain to celebrity arrests, politician mishaps and “news of the weird” items like lawnmower DUI. But the DUI blogging community has been tracking a surprisingly high number of athlete DUIs lately – particularly in the Midwest. The latest celeb-athlete DUI arrest occurred in Texas last Monday, when Justin Blackmon, an Oklahoma State wide receiver — who, incidentally, boasts an astounding 1,112 receiving yards and 14 touchdowns this year — got pulled over and arrested, after an officer caught him zipping along Interstate 35 at 92 miles per hours in a 60 mile per hour zone. 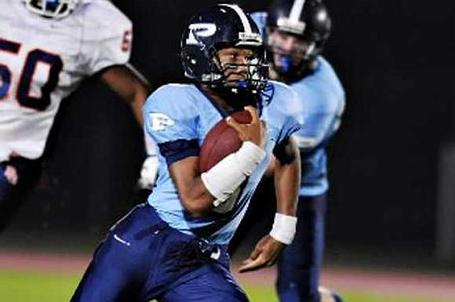 If you have been caught and booked on charges of DUI in Pasadena, DUI in Glendale, DUI in Burbank, or DUI in Los Angeles, you might be able to relate to what happened to Mr. Blackmon. Apparently, the 20 year-old had been cruising on the highway after attending a Dallas Cowboys’ game. A spokesperson for the Carrollton Police Department reported that Blackmon failed a field sobriety test after he got pulled over for speeding.

In Texas, even trace amounts of alcohol in the system can lead to serious penalties for minors under the age of 21. While slightly different rules apply to California drivers, field sobriety tests across the nation have remarkably similar features. If you have been pulled over for driving under the influence in Los Angeles, you may have had to take field sobriety tests — exams which theoretically help officers determine your mental and physical state.

A typical first test is the horizontal gaze nystagmus test, during which an officer measures pupil reaction time to a stimulus (such as a flashlight). A slow reaction might indicate Los Angeles DUI. Subsequent tests will examine your balance. These could include the “walk the line test,” “one leg stand test,” “Rhomberg test” (tilting your head backwards and counting to 30), and the “finger to the nose test.” An officer may deploy some or all of these tests, and he or she may also test your mental facilities by asking you to do things like recite the alphabet backwards. Officers will also search for so-called “symptoms” of Southern California DUI, such as odor of alcohol on your breath, lack of physical or mental coordination, bloodshot eyes, inappropriate behavior, and admission to having consumed alcohol recently.

So what can you do if you or a loved one has recently been tagged with a charge of Los Angeles DUI? Whether you are a big sports star like Justin Blackmon or a “non celebrity,” the punishments for a conviction – even for a misdemeanor conviction – could be quite painful and severe. A qualified and experienced Los Angeles DUI lawyer can help you develop your case.

Michael Kraut of Hollywood’s Kraut Law Group boasts tremendous experience. He was educated at Harvard Law School, and he spent 14 years as a Deputy District Attorney for the City before becoming a criminal defense lawyer. Attorney Kraut has a superb record at jury trials, and prosecutors, judges, and other authorities in the Los Angeles DUI legal community hold him in high regard.