Dan Werner, a former basketball player for Florida, got knocked with a DUI in Gainesville last week, and the arrest has echoed across the country – even Glendale DUI bloggers are talking about it. The 23-year-old Werner was pulled over because police noticed that one of his taillights had gone out and he had his high beams on. If you’ve been stopped for Glendale DUI, Burbank DUI, Pasadena DUI, or Los Angeles DUI, perhaps the police first noticed your vehicle because of something minor, like a taillight malfunction. 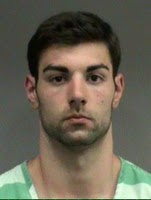 In any event, Werner argued that “his girlfriend was intoxicated” so he was driving her home. But authorities on the scene noticed that the former B-baller had “watery bloodshot eyes” and had also “consumed two alcoholic beverages” (quotes courtesy of the AP). Police officers also argued that Werner did not perform with grace on field sobriety tests.

But here’s where it gets interesting! (At least for analytical purposes.) The AP report on the arrests notes that Werner’s breathalyzer results were just 0.65% and 0.7%, respectively. Thus, his tests were under the Glendale DUI and Florida limit of 0.08%. Despite the fact that his BAC readings came in under the line, police arrested Werner and then released him last Tuesday on his own recognizance.

You might be surprised to learn that, even if you blow a negative on a Glendale DUI breathalyzer test, you can still be arrested and charged with a crime. The California vehicle code has two basic laws regarding DUI. Section 23152(b) defines DUI as driving with a BAC of 0.08% or greater. But 21352(a) defines the crime slightly differently – if you are under the influence of alcohol, even if you’re not above the limits stipulated in Section (b), you can still be hit with a crime. It’s an unfortunate reality, but it is the reality.

The big question facing people charged with Glendale DUI is: what do you do next?

Although the law provides you with ample opportunity to defend yourself – you can also work with a public defender – experts suggest that you’d be better off retaining an experienced Los Angeles criminal defense attorney.

The stakes for DUI defendants are high. If you put up an inadequate or underadequate defense, you could face jail time, fines, fess, driving restrictions, mandatory education classes, and a host of other penalties. Michael Kraut of Los Angeles’ Kraut Law Group (Offices in Glendale at 121 W Lexington Dr, Glendale, CA 91203 Phone: (818) 507-9123) can provide excellent strategic guidance. Mr. Kraut is not only Harvard Law School educated former prosecutor but also a master of jury trials – he has a fantastic success rate, and he is ready to go to trial to defend your interests, if need be.