The crime of driving under the influence in Glendale (or anywhere else, for that matter) is serious enough. But when DUI drivers compound their problems by doing things like driving the wrong way on the freeway, accidents can happen far more easily – and these accidents have a far greater likelihood of leading to fatalities. 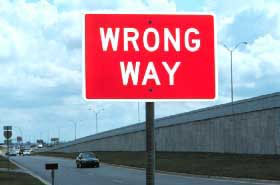 Not all the scary California DUI news has to do with Burbank DUI, Glendale DUI, Pasadena DUI, and Los Angeles DUI events – stuff that this blog normally tries to cover. Sometimes, our neighbors in the northern CA also get into trouble. Case in point, Mercury News is reporting on a terrifying story about a 57-year-old taxi driver, Steve Sharek, who drove his cab up an off-ramp onto Highway 1 – a misadventure that ended in a significant accident (although, fortunately, not a fatal one).

Here’s the story, per mercurynews.com: “About 1:50 P.M Monday, Sharek drove a taxi up an off-ramp at State Park Drive in Aptos to southbound Highway 1 in the wrong direction, the CHP said. The driver apparently realized his error and made a U-turn…by that time, a 57-year-old Aptos woman in a white, 1994 Toyota Avalon slammed on her breaks (and slammed into a 2001 Chevrolet Suburban).”

Fortunately, both the Aptos woman and the driver of the Suburban escaped without significant injuries, at least according to news reports. After his U-turn, Sharek attracted the attention of CHP officers, who pulled him over and arrested him under suspicion of DUI.

Most defendants understand that charges of injury DUI in Glendale may be more significant than simple Glendale DUI charges. But how different, exactly, are these crimes?

If you look at the California Vehicle Code sections that describe these crimes, you might not see much of a difference… at first.

If you glance at these CVC codes quickly, they look basically identical!

But there is an enormous, profound difference. A 23152 charge is generally a misdemeanor – a serious crime, to be sure. But a 23153 charge, on the other hand, is a felony charge. Convicted felons can wind up with extensive prison sentences. So even if the person you hurt in your DUI accident wasn’t “that hurt,” you could still find yourself a felon if the prosecution manages to convict you under 23153 CVC.