Those who cover Pasadena DUI stories often set their sites on parochial stories – that is, police blotter news items about things like Glendale DUI, Burbank DUI, Los Angeles DUI, and Pasadena DUI. But it’s often helpful to analyze national news as well to get perspective on how the goings on in other states might have bearing on the politics, science, and legal philosophy of Southern California DUI defense.
Regular readers will remember that we have been closely following reports a few months ago on the revelation that many San Fernando DUI breathalyzer tests used from January to March this year had been compromised by technology flaws. Well… it turns out that Southern California DUI breathalyzer tests are not the only broken breath tests out there this year. 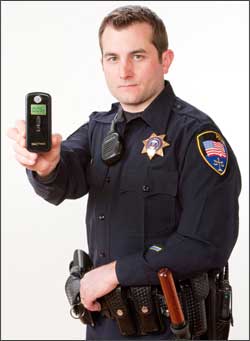 Check out this breaking news out of Montpelier, Vermont of all places (quote comes from the AP): “A mistake in the software setup on a breath analysis machine and whistle-blowers’ complaints about unethical lab work threaten dozens of drunken-driving prosecutions in Vermont. At issue are breath tests performed by a DataMaster DMT machine at a Vermont State Police barracks that authorities say was not set up properly. Amid a broadening inquiry by two defense attorneys, dozens of criminal convictions could be reopened and a handful of civil license suspensions are being overturned.”

The AP article also mentions that literally hundreds of DUI cases may be reopened and reevaluated because of other Vermont Department of Health machine maintenance problems.

Despite the snafu out of Vermont and the problems that we reported about here in Southern California, it’s unlikely that police officers and the public will seriously reconsider the efficacy of breath tests.

This is, in a word, frustrating. No matter how often blogs like this report on the potential technical glitches, human errors, and other problems that can distort readings and cause false positives (such as ketones on the breath, the fact that men and women process ethanol alcohol differently, the fact that the depth of the breath that you blow into the machine can alter BAC results, etc.), we still collectively give breath tests way too much “trust.”

An experienced Los Angeles criminal defense attorney can review the breath test that officers conducted on you and determine if and how to challenge those results. Michael Kraut (of Pasadena’s Kraut Law Group – 790 East Colorado Boulevard, 9th floor, Pasadena, California 91101 Phone: (626) 345-1899) has the facility and familiarity with DUI law you need. Mr. Kraut served for nearly 15 years as a prosecutor for the city prior to representing defendants of DUI crimes. He has a great track record at jury trials, and he has won the respect of peers in the legal community.