California’s police officers don’t yet have to worry about issuing a DUI in Los Angeles for someone who is driving erratically after legally smoking marijuana in the state. (They’ve undoubtedly arrested many for that offense who have been smoking it illegally.) 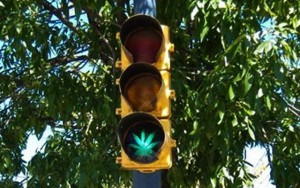 But Colorado, which became in 2012 one of the first two states to legalize pot for recreational purposes (the other was Washington State), is apparently dealing with that problem. The Colorado Department of Transportation launched a public information campaign last year that reminds motorists that being impaired by any drugs–not just alcohol–could land you in jail on a charge of DUI. CDOT calls it drugged driving.

Although much of the campaign’s material focuses on marijuana impairment, CDOT officials also want to reinforce the message that driving with any kind of drugs that cause impairment–including prescription medicines–could lead to a DUI arrest. CDOT is using posters and radio and television public service announcements to get its message out to drivers.

In 2013, 627 drivers in Colorado were involved in 481 traffic accidents that resulted in a fatality. More than 21 percent of those drivers–103–were what CDOT calls drugged drivers. Thirty six of them tested positive for cannabis alone; another 10 tested positive for pot and some other drug.

Of course, California cops and the California Department of Transportation may want to be taking notes. If pro-legalization forces have their way, voters in the state will have another chance to vote on legalizing cannabis in 2016. The California electorate rejected legalization of pot in 2010, but many observers give it a much better chance of passage this time due to the more widespread acceptance of marijuana usage in the U.S. today.