So many aspects of the Burbank DUI experience can be so frustrating and humiliating. 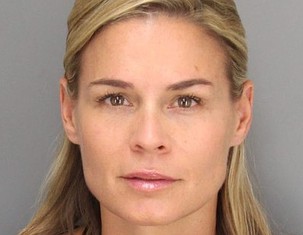 Take the DUI mug shot. Even celebrities can get tripped up by it. Consider Nick Nolte’s famously disheveled DUI portrait, for instance. This notorious example of “disheveled DUI chic” was funny to the world but no doubt devastating to Nolte.

On the opposite end of this spectrum, perhaps, is celebrity chef Cat Cora’s new DUI mug shot, which went viral a few weeks ago because the Food Network star (and co-host of “Around the World in 80 Plates”) looked fresh faced, pretty, even exuberant in her pose.

About Cora’s Arrest
Back in June, Cora rear-ended a BWM up in Santa Barbara. Officers who responded to the incident tested her with two breath tests: the readings showed 0.19% BAC and 0.20% BAC, respectively.

Just to remind you, per California Vehicle Code Section 23152(b), the legal limit for a Burbank DUI is 0.08% BAC. So Cora tested at practically 2.5 times the legal limit.
Adding insult to injury, Cora allegedly called the people she hit “nerds” – at least according to initial reports from the website TMZ.com. She later released a statement to a cable news network: “I deeply regret my decision to drive that evening, after my designated driver became unavailable… I learned a very important lesson from this experience and take full accountability for my actions. This will never happen again.”
Beyond the standard aspects of her DUI situation, what really caused a stir on the blogosphere, was that she waited 11 days after her arrest (on June 17th) to take her mug shot. CA law permitted this, since Cora had no previous DUIs on her record.
Cora also managed to side step any time in jail: she was taken to the Sobering House in Santa Barbara, instead.

Your Burbank or Glendale DUI situation might be a tad different.

If you get convicted of driving 2.5 times the Burbank DUI limit, prepare to face serious penalties, even if this is your first time ever getting in trouble with the law.

First time offenders here in Los Angeles can lose their licenses for a year. They can face months behind bars; months of alcohol school and probation; thousands of dollars in fines and fees; compulsory installation of an interlock ignition device in your car, which you must pay to maintain; and other “not great stuff.”

By the way, this is the punishment just for a standard misdemeanor Burbank DUI!
If you hurt someone, committed a second or third offence, resisted arrest, or engaged in additional criminal behavior, your penalties can get significantly ratcheted up.

What should you do?

Every case has unique facets and intricacies. An experienced Burbank DUI criminal defense attorney at the Kraut Law Group (2600 West Olive Avenue, 5th Floor, Burbank, California 91505 Phone: (818) 563-9810) is standing by to listen to your story and give you a confidential, free consultation about your rights and potential legal strategies. Attorney Kraut is a successful, well respected defense attorney (a Harvard Law School educated former prosecutor, on top of that), and he can start you on the course to reclaiming your life and rehabilitating your reputation.