As students of this blog know, the legal limit for Los Angeles DUI is a blood alcohol concentration of 0.08%. Well, Tom Lewand, the President of the Detroit Lions, got pulled over the Friday before last for driving with a BAC of 0.21% – nearly three times Detroit’s (and California’s) legal limit! 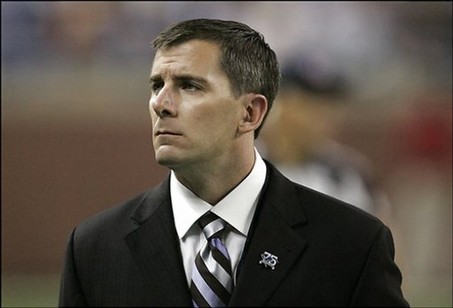 According to the police report, Lewand was driving in Denton Township to pick a buddy up – he was, ironically, to be the designated driver for their night out on the town. A deputy from the Roscommon County Sheriff’s Department pulled him over, noticed “a strong odor of intoxicants coming from the driver compartment of the vehicle” and subjected Lewand to field sobriety tests. Allegedly, Lewand quickly failed those – he lost his balance while trying to stand on one leg and failed the so-called “finger to the nose” test by touching his lip instead of his nose.

Despite the President’s claim that he had “not drank in a year-and-a-half;” subsequent to the incident, he promised that he was in “active recovery.” William Ford, the owner of the Lions, went on record as providing “full support” for his embattled President. If Lewand gets convicted, he can be subjected to significant penalties – not just according to Detroit state law but also according to the NFL, which must enforce its personal conduct policy.

If you get stopped for a Beverly Hills DUI, Pasadena DUI, or any other similar charge in Southern California, police will likely ask you to perform field sobriety tests similar to the ones that Lewand faced (and allegedly failed). Let’s quickly go over what these are.

Field Sobriety Tests (FSTs) challenge the driver’s mental and physical coordination. The horizontal gaze nystagmus test measures how fast the driver’s pupils respond to a stimulus. Slow reaction time could indicate DUI. Other tests of physical coordination include the aforementioned one leg stand and finger to the nose tests as well as the Rhomberg test, in which a suspect must lean his/her head backwards and count up to 30.

A driver suspected of being DUI in Beverly Hills may also be asked to recite the alphabet backwards and to do other tasks to demonstrate mental awareness and competency. Finally, a police officer might look for behavioral and other clues that you might be under the influence, including odor of alcohol on or around you, bleary bloodshot eyes, slowness in responding to questions, and erratic temperament.

Responding effectively and proactively to a charge of Los Angeles DUI can make a world of difference in terms of what punishments the court hands out to you. An inept or inadequate defense can leave you facing significant jail time, huge court costs and fines, intense probation, and a lengthy suspension of your California driver’s license. On the other hand, if you work together with an experienced Los Angeles DUI defense attorney, you might be able to fight back against the allegations or, at the very least, get your punishment substantially softened.

To craft a calibrated defense, talk to attorney Michael Kraut of Los Angeles’ Kraut Law Group. As a Harvard Law School educated former prosecutor with a terrific track record at jury trials and a complete spectrum of court experience, Attorney Kraut can and has delivered results, even in difficult (and seemingly lost) Southern California DUI cases.