Russell Rhodes, a 50 year-old anchor for WTVT Channel 13 in Tampa, has pled no contest to a misdemeanor charge stemming from a January 16, 2009 DUI arrest. Although Rhodes was not charged with a Southern California DUI (in fact, his arrest occurred in Southern Florida), his ordeal caught the attention of many legal watchers here in Los Angeles. 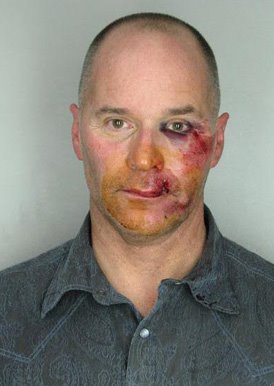 According to reports, a deputy stopped the TV host in a parking garage out of suspicion that Rhodes was driving under the influence. Rhodes fled from the officer on foot. The officer pursued and, in an attempt to detain his suspect, tackled the TV host to the ground, causing bruising and facial bleeding (evident in the attached mug shot).
Had a skillful Southern California DUI defense attorney been handling his case, Rhodes might have been able to get all charges against him excused and even take legal action against the deputy who hit him. That said, Rhodes’ sentence of 50 hours of community service and half-a-year of probation is relatively mild compared to punishment for a Los Angeles DUI, which can include a battery of unpleasant penalties.

Even for a first time misdemeanor, a suspect may have to pay a fine of $1,000, endure a driver’s license suspension of a year (with no restricted license privileges), and face a minimum of 48 hours in police custody and a maximum of half-a-year in jail. In addition, first time offenders can also face probation, steep court costs, and mandatory time in Los Angeles DUI alcohol school. Multiple offenders face increased minimum mandatory jail time as well as longer license suspensions, steeper fines, higher court costs, stricter probations, and other penalties.

Just because you or a loved one has been arrested for a Los Angeles DUI doesn’t mean you must face strict punishment. A reputable attorney, such as Michael Kraut, can provide the strategic support you need to craft a proactive, realistic, and aggressive defense. Attorney Kraut is thoroughly versed in the Los Angeles criminal defense system. He’s worked as both a prosecutor and a defense attorney, so he knows what its like to fight from both sides. He also boasts great credentials, including a law degree from Harvard University and wide acclaim from his legal peers.