Although the majority of cases of DUI in Los Angeles involve excessive alcohol consumption, police in California and other states are seeing more and more DUI incidents caused by illegal and/or prescription drugs. 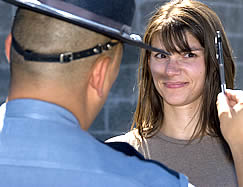 The Los Angeles Police Department has been a pioneer in training officers to distinguish these types of DUI cases. In the 1970s, two LAPD sergeants worked with medical doctors, research psychologists and other medical professionals to develop a simple, standardized procedure for recognizing drug influence and impairment. Their work resulted in a Drug Evaluation and Classification Program (DECP), which jurisdictions throughout the U.S., Canada and the United Kingdom now employ for training.

Connecticut held its first DECP training in 2011. More recently, the state’s drug recognition experts (DRE) conducted a training class in Manchester. According to the Hartford Courant, the course included 16-hours of initial training, a 56-hour drug recognition school and a 40-60 hour certification process.

The officers had to study the seven categories of drugs and the signature symptoms that users of each type display. The categories include narcotic analgesics (heroin and painkillers); depressants (alcohol and benzos); stimulants (cocaine and meth); inhalants (aerosols and solvents); hallucinogens (peyote and LSD); cannabis (marijuana and hashish); and dissociative anesthetics (PCP).
Police officers who took the course learned how medical equipment such as a blood pressure meter, oral thermometer, a pupilometer (which measures the pupil’s response to visual stimuli) and a stethoscope can help them identify which drugs a suspected DUI driver might have used.

There’s a real need for such programs. A study from the National Highway Transportation Safety Administration showed an increasing number of nighttime weekend drivers will illegal drugs in their systems, rising from 16.3 percent of drivers in 2007 to 20 percent in 2013-2014.