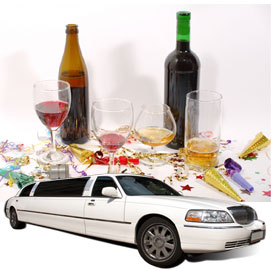 But although state arrest numbers went up by 97, crash fatality numbers went way down. In 2009, 11 people died on California’s freeways on New Year’s Eve; in 2010, only six died.

The New Year’s Eve arrests followed on the heels of a statewide campaign to crack down on driving under the influence in Southern California and Northern California. As of December 28, 2009, over 1,400 people had been snagged in L.A. County alone for DUI violations. And over the Christmas holiday weekend, the CHP arrested over 200 people in LA for driving under the influence.

CHP officials have trumpeted these numbers as evidence that their statewide crackdown saved lives and kept California roads safer.

When CHP agents arrest people for driving under the influence in Long Beach, what precisely does that mean, legally speaking? California Vehicle Code Sections 23152 (a) and 23152 (b) spell out precisely what constitutes a DUI in Southern California. Section 23152 (a) stipulates that a driver operating a car, truck or other motor vehicle on state roads while under the influence of alcohol or drugs can be subject to arrest; if convicted, he or she will face an array of unpleasant punishments, which can include driver’s license suspension, jail time, court costs and fines, points on a driver’s license, and now — as of 01/01/2010 — a mandatory installation of an interlock ignition device (IID) even for first time Long Beach or Glendale DUI offenders.

Section 23152 (b) stipulates that it is illegal to operate a motor vehicle if your blood alcohol concentration is above 0.08%.

Crafting a methodical and proper legal defense to charges of driving under the influence in Long Beach (or elsewhere in Southern California) can prove immensely challenging, even if the facts are on your side.

With so much at stake for your future, finances, and freedom, connect with Michael Kraut of the Kraut Law Group. Attorney Kraut has a unique vantage, in that he spent nearly a decade and a half working on the other side of the law — as a senior Deputy District Attorney for the city of Los Angeles. Now, as a representative for criminal defendants, the Harvard Law School educated Attorney Kraut has won a reputation among clients and legal peers alike for delivering results (99% percent success rate at jury trials) and coming up with strategic arguments that many other DUI defense attorneys might overlook.