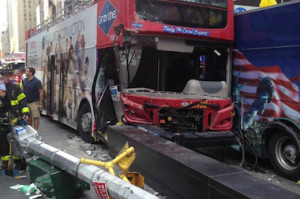 You might imagine a driver in a Honda Accord getting escorted into a squad car after a nasty wreck on the 405 or the 101. Or you might picture a Hollywood exec in a BMW stopped at a checkpoint on Sunset after a raucous night out with some potential clients.

You probably do NOT picture a double-decker bus toppled over or an ambulance spun out of control.

But people drive DUI in all sorts of vehicles, including, boats, lawnmowers, and even jerry rigged contraptions that defy classification.

Let’s analyze two such events that were recently in the news.

First, a spectacular DUI-related bus crash rocked New York City. Fortunately, the accident did not cause life threatening injuries, but it certainly created a big ruckus in the Big Apple. The double-decker bus driver smashed into a plaza on Times Square and hurt over 15 people, three of whom suffered serious injuries. Fortunately, no one died.

Authorities arrested 58-year-old William Dalembert, charging him with a DUI. According to reports, Dalembert has a checkered driving history, including a record of multiple license suspensions over the years as well as administrative infractions.

Meanwhile, closer to home in Orange County, a crash at the intersection of Garden Grove and Beach Boulevards between an ambulance and a vehicle in the town of Stanton led to the hospitalization of four people as well as an arrest for DUI. A preliminary investigation led authorities to blame 27-year-old John Dantzler; they booked him on DUI charges and held him on a $100,000 bail. Again, by the grace of God, no one died or suffered critical injuries; things could have been much, much worse.

Do people who drive vehicles like ambulance, double-decker buses, trucks, fire trucks, government vehicles and school buses have special safety responsibilities? Can prosecutors hit them with special punishments for DUI?

The answer depends. Drivers of specialty vehicles can be held to higher standards. Depending on what happened, they can lose special licenses, get fired, face enhanced fines and fees, and more.

No matter what kind of Los Angeles DUI charges you face — or how complicated the matter seems to be – the team here at the Kraut Law Group is here to help you make sense of what happened and develop an appropriate response. Call our offices now to schedule a free consultation.