Police arrested you for DUI in Los Angeles last week or last month. In either case, you might be laboring under the assumption that you can quickly put the DUI behind you. 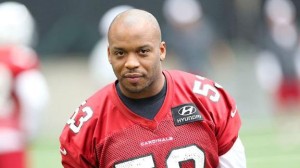 Even if you didn’t hurt anybody, and you were just barely over the legal limit of 0.08%, you can face profound consequences that can hamper your life, your career, your relationships and your finances for months or years. For a real world object lesson, let’s take a look at the story of John Abraham, a linebacker for the Arizona Cardinals whom police stopped for DUI back in June.

According to reports, on the afternoon of June 29th, Abraham was driving his black Dodge Challenger in suburban Atlanta, after leaving a strip club called the Pink Pony. When police stopped Abraham, he confessed to having had two drinks. He even told officers that he had been waiting on a designated driver, who never showed. Abraham also allegedly said that he didn’t feel safe getting behind the wheel… but he did anyway.

He bombed out on the walking and balancing tests — presumably similar to the field sobriety tests police give here in Los Angeles, such as walk the line, count backwards by 3s, finger to the nose and stand on one leg. He also refused to take a breath test.

Will the DUI sideline Abraham’s career or create problems in his personal life, such as a license suspension, jail time or just general trouble with his relationships? The answer will depend on the minutiae of his stop and his history:

•    Will his breath test refusal complicate matters and lead to more charges?
•    Can he “explain away” the field sobriety test failures?
•    Did he have a criminal history (or DUI history), or was this his first offense?
•    Can he and his attorneys put together a compelling counter-narrative to challenge the prosecutors’ version of events?

It’s one thing to get arrested for DUI in Los Angeles and to face unpleasant consequences, such as license suspension, fines and fees, higher insurance rates, jail time, and recriminations from friends, family and colleagues.

It’s another thing entirely to get caught on video doing something dumb behind the wheel… and then watch helplessly as that video goes viral on YouTube. Unfortunately for people like Dustin Johnson (a professional golfing phenom), once humiliating video footage escapes into the blogosphere, you can’t put the genie back in the bottle. In March 2009, when police stopped Johnson in his hometown in South Carolina, the golfer began to lose it when officers put him through the paces of field sobriety tests (FSTs).

The video shows Johnson tripping several times during the FSTs. An officer then escorts him into a police vehicle.

Johnson later confessed his regret, saying “I made an error in judgment… I have let myself down and others who support me. I am handling the matter privately and, rest assured, I will definitely learn from my mistake.”

Unfortunately, the pro apparently did NOT learn from his mistake.

Recently, he failed three separate drug tests given by the PGA Tour; he tested positive for marijuana and for cocaine (twice). As a result, the PGA hit him with a long suspension. Again, Johnson made noises of regret: “I will use this time to seek professional help for personal challenges I have faced.” The now-30-year-old golfer may have a challenging time scrambling back following his suspension.

Sometimes, DUIs happen “out of the blue.” For instance, someone who has no criminal history or history of alcohol problems makes a bad call at a party and drives when he really shouldn’t.

But when someone gets in trouble repeatedly for alcohol and drugs, he may need help addressing the fundamental reasons for the destructive behavior. As Dr. Lance Dodes and Zachary Dodes describe in their new book, The Sober Truth, the conventional wisdom about how and why addictions form may be deeply flawed. People like Johnson — who apparently repeatedly struggle with substance abuse issues — may need a different kind of help than they’ve been getting.

If you or someone you love needs help with Los Angeles DUI defense, contact Attorney Michael Kraut of Kraut Law Group right now to schedule a free and confidential consultation with a former Senior Deputy District Attorney.