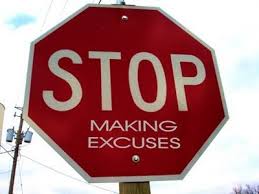 •    The police officer who stopped you at a check point;
•    The breath test that gave you a false positive;
•    The friend who promised to be your designated driver but who bailed the party at the last minute, leaving you stranded;
•    Etc.

But consider looking inward as well as outward. You may in fact have just been the victim of bad luck – a defective PAS test, for instance, or police entrapment. However, you might have created/worsened the situation:

It’s difficult to examine excuses and to take responsibility for what happened.

We are not trained to know how to process bad events, like DUI arrests, and to learn from them. Instead, from a very early age, we are trained to punish “bad” behavior and reward “good” behavior, without much thought as to why we acted “badly” or “good.”

DUI driving is seen as a behavior to be avoided at all costs, so we rarely explore the unmet needs underneath our dangerous actions. For instance, let’s say that you drove while buzzed, because you really wanted to hang out with some cool new girls you met at fraternity party. You knew “it was stupid,” but you overrode your instincts. Why? Perhaps you were lonely. Or perhaps you were having a great time after a stressful semester of classes, and you just really needed to some fun.

Our fundamental needs for companionship and fun are not “bad” – they are very human and very essential. You just chose a poor strategy (driving DUI) to try to meet those needs. Considered in this way, the DUI event was neither bad nor good but rather an inelegant strategy to meet needs.

For actionable insight into what to do after your Los Angeles DUI, connect with attorney Michael Kraut of the Kraut Law Group. Mr. Kraut is a Harvard Law School educated ex-prosecutor with ample experience and lots of connections.