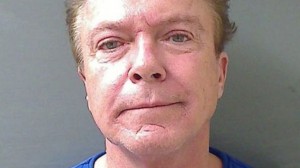 Police arrested the Florida resident at LAX in January. It was Cassidy’s third DUI arrest and his second in less than six months. Cassidy allegedly blew a 0.16% BAC on his breath test – twice the California limit.

Back in August 2013, police in New York arrested the actor and hit him with a felony DUI charge. Tragically, Cassidy had just finished a stint at rehab. His manager said the actor had felt overwhelmed after being deposed.

But Cassidy’s DUI trouble started way before that. In February 2011, he pled guilty to a misdemeanor DUI in Florida. He got off with a year’s probation and a relatively short (six month) license suspension. Police had stopped him on a Florida parkway, and he blew a 0.14% on a breath test. Police also said he had had a bottle of Bourbon open in his vehicle.

After this latest arrest, Cassidy released a statement from rehab: “this has been a very difficult time for me battling this deadly disease, like millions of others in our country. I will remain in treatment for as long as necessary, and I am getting the best care I can possibly get anywhere. I am working as hard as any human being to live a sober life.”

What happens when someone’s convicted a second time for DUI in Southern California?

If you’re convicted of DUI in CA twice within a 10 year period, you face mandatory jail time — up to six months! You will also need to spend a year and a half in alcohol school (up to 30 months, in some cases). The court can suspend your California driver’s license for two years and impose what’s known as “formal probation.” This means you’ll need to check in with a probation officer on a regular basis. Alternatively, you may face “informal probation.” This means you won’t have a probation officer, but you will need to hew to certain standards. You may also need to install (and pay for) an Interlock Ignition Device on your car and face massive fines, fees, and court costs – on top of a likely spike in your insurance rates.

To make sense out of your Los Angeles DUI charges, connect with the team here at the Kraut Law Group today for sensible, sensitive insight and a free consultation.