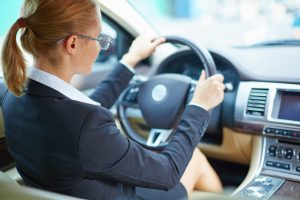 Starring Cary Crant and Ingrid Bergman, this classic Alfred Hitchcock film contains a famous DUI scene while Grant’s character (Devlin, an undercover federal agent) is trying to recruit Bergman’s character (Alicia Huberman) as a spy against the post-war Nazis. After Devlin crashes Alisha’s party and both consume generous amounts of alcohol, Alicia decides to go for a joy ride and Devlin accompanies her. During the wild, reckless drive, Devlin appears tense, keeping his hand near the steering wheel in case he needs to take over from Alicia. The ride ends when the car gets pulled over by a motorcycle cop. While the drunken Alicia presumes she is going to jail, Devlin breaks cover and flashes his badge to the cop to indicate he has things under control. Devlin then drives the car home.

What the film gets right: DUI is ultimately presented in a negative light, as the scene is suspenseful and perilous. Alicia’s reckless behavior is seen as a negative as well, stemming from her pain and disillusionment at discovering her father was a Nazi war criminal. When she is pulled over, she verbally recognizes the DUI was her second offense and she will probably go to jail for it.

What the film gets wrong: Devlin, the cop character, is depicted as Alicia’s protector, able to take control in case the reckless ride gets truly out of hand. However, the film conveniently overlooks the fact that Devlin, too, has been drinking through the night as part of his cover. Although he appears to be completely sober, in real life he would have been in no better condition to drive than Alicia. By distorting this reality, the film subtly suggests that some can handle driving under the influence better than others.

This film contains a poignant scene in which the main character, an alcoholic played by Nicholas Cage, is portrayed drinking vodka from an open bottle while behind the wheel. He puts the bottle out of view as a motorcycle cop sides up to him. After a few visual glances between the two of them, the cop accelerates past Cage, who immediately resumes drinking from the bottle.

What the film gets right: Contextually, the film portrays the DUI incident in a negative light. Cage’s character is a clearly broken individual whose behavior stems from pain and addiction. The scene seeks to depict him as a man on a dangerous precipice.

What the film gets wrong: Police officers are trained to detect signs of alcohol consumption beyond a person’s ability to handle the vehicle. In a real-world scenario, it’s more likely the cop would have pulled him over to investigate for DUI based solely on his facial appearance and behavior. Also, the fact that Cage’s character can so easily fool the officer seems to suggest that anyone could do the same.

The central plot point of this sci-fi/romance indie film is a DUI accident involving a young woman who had been indulging with friends after learning of her acceptance to MIT. The resulting crash kills a pregnant woman and her son. The film follows the fallout from the accident, both of the young woman herself and the man who lost his wife and children in the crash.

What the film gets right: In the midst of a sci-fi plot line involving a recently discovered “duplicate” earth, this film takes an unflinching look at the long-term effects of DUI. The main character serves prison time, does not go to school and instead takes a job as a custodian. She also struggles with guilt over the pain she has caused the surviving husband and father, who is depicted as a broken, grieving man. She meets him and even falls for him, but she cannot get up the nerve to admit she was the driver responsible for the death of his family.

What the film gets wrong: More of a plot issue than a mishandling of the topic, it is highly unlikely in a real-world scenario that the father/husband would not have known the identity of the woman who killed his family. DUI offenses are a matter of public record, and the surviving victim would have the right to face her.

In looking at depictions of DUI in film, TV, music and even other outlets, what do they tell us about our culture in general? Do these portrayals influence public attitudes one way or the other, or do they merely reflect them? Is it the job of entertainment media to teach moral lessons or set good examples? Do gratuitous depictions of DUI show disrespect to actual victims or encourage more of the same?

The answers to these questions really depend on whom you ask; it also depends largely on the specific instance you’re looking at, since some songs, shows and films obviously handle the topic better than others. We may never come to a conclusion that everyone can agree with, but perhaps the biggest takeaway is this: The fact that DUI occurs so frequently in popular culture demonstrates, at the very least, that it is still a significant issue in our world—and that there is much more we can do to prevent it.

If you have been arrested for DUI-related charges or DUI, we can provide compassionate legal representation. Give our offices a call to learn more.