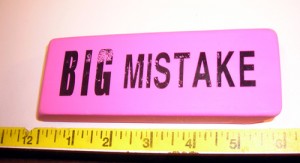 But if you’re like many (perhaps most) defendants, odds are you will make one of the following mistakes that could compromise your chances to fight your charges and potentially lead to unnecessarily long and harsh punishments, like excessive jail time, very steep fines and fees, a lengthy suspension of your California driver’s license, etc. That doesn’t even include all the auxiliary problems that will flow from the DUI arrest/conviction, such as drained self esteem, problems with your relationships and employer, and so forth.

Bearing all that in mind, here are three important blunders to avoid:

1. Blabbing about how much you drank to police.

Your instincts might be to “come clean” to the officer in the hope that he or she will show leniency. Or you might get defensive and deny wrongdoing: “I only had two or three drinks!” Don’t get into that business. Save your explanation for later.

2. Doing stupid things after the stop or accident.

For whatever reason, when people get stopped for DUI, they often lose touch with their senses and engage in wild behavior that puts them and others at risk. This appears to be a somewhat universal problem. (Consider actress Reese Witherspoon’s bizarrely aggressive behavior, after a Georgia trooper pulled over her husband, John Toth, for DUI in the summer of 2013.)

We’ve catalogued diverse examples of this phenomenon at work – drivers who hit and run; who resist arrest; who compound their humiliation by saying or doing totally ridiculous things during or after arrest, etc. The moral is: maintain your composure and dignity. Your behavior after the stop or arrest can have a measurable impact on your punishment (or lack of punishment) and thus on your future.

3. Waiting far too long to connect with a lawyer.

Whether you talk to someone at the Kraut Law Group or find another Los Angeles DUI lawyer that you trust and respect, get experienced insight into your case sooner than later.

Imagine if you had a heart problem. Would you wait days or weeks to call a doctor? Or would you get in touch with a doctor as soon as you could? When your health’s on the line, the choice is clear – you make the call as soon as possible. This same kind of logic applies to your DUI defense. Don’t wait to get insight into your case, so you can start making responsible decisions.