If you drive a truck DUI in Long Beach or elsewhere in the Southland, not only could you face jail time and a license suspension, but you can also lose your job and face other industry penalties. 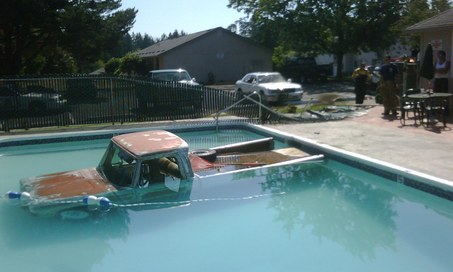 Prosecutors bring the hammer down on DUI truckers for a reason: trucks are the most dangerous vehicles on the roads. They are more massive than passenger cars, motorcycles, and lightweight vans. Thus, they can inflict geometrically increased levels of force during accidents. A 20-ton truck travelling at 60 miles per hour that crashes into a wall will impart as much force on that wall as will a one-ton racecar that smashes into the same wall at 1200 miles per hour – over four hundred miles per hour faster than the speed of sound!

Consider those forces in light of a near tragedy out of a Beaverton, Oregon. 38-year-old Matthew Allen Hamilton almost drove his pick-up truck off of a Highway 217 overpass into traffic. The scene captured national attention: a red pick-up truck dangled precariously, stopped by destruction only by a surprisingly sturdy overpass guard rail.

It took police and rescue workers hours to rescue Hamilton and remove his truck from the guardrail. Once they plucked him down, they gave him a blood alcohol test, which found that he had a 0.50% BAC – that’s well over six times the Long Beach DUI limit. That’s a BAC level high enough to kill many people or at least make them comatose. So in some sense it’s remarkable that Hamilton even survived the drinking, let alone that he survived nearly driving off the overpass.

The drama behind this story notwithstanding, if you’ve been recently pulled over for driving under the influence in Long Beach, you can learn much from understanding Hamilton’s plight and possible best next steps.

1. Getting a Long Beach DUI charge can lead to public humiliation.

Hopefully, your arrest has not yet led to substantial public shaming – it hasn’t cost you clients, friends, prospective job opportunities, etc. But consequences like that can happen.

2. The fact that you survived your Long Beach DUI event means you got incredibly lucky.

You may not feel particularly lucky now, especially if you hurt someone else and/or if you face massive potential criminal penalties. But driving DUI is a dangerous game. In Hamilton’s case, slightly different physics would have resulted in his certain death.

3. You can take action, now, to start making things better.

Just because you are in a dangerous, helpless, or scary position doesn’t mean that you have to suffer helplessly forever. The team here at the Kraut Law Group in Long Beach can help you understand and craft an appropriate Long Beach DUI truckers’ defense and answer your questions about best practices.