Drivers arrested for DUI in Los Angeles often leave a very visible trail of damage in their wake: wrecked vehicles (theirs and/or others’), downed utility poles or traffic signals, broken windows in storefronts. But sometimes the damage spreads a lot further. 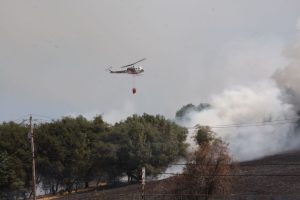 According to a story in the August 29th Los Angeles Times, 44-year-old Rene Ilene Hogan was driving under the influence when she started a fire that set ablaze 450-plus acres of grass and forest in Calaveras County.

Hogan was driving a 2002 Kia Rio but didn’t realize that her rear tire was flat. She continued traveling until the tire wore down to the wheel rim, causing sparks to fly. Some of the sparks hit the very dry grass along the highway, setting off several fires. Her Kia eventually caught fire as well, but Hogan kept driving, apparently oblivious to the damage she had caused and her own peril.

Motorists who saw her car on fire tried to alert her, but Hogan didn’t notice them. Finally, one car pulled in front of her, forcing her to stop. The driver and nearby residents managed to pull Hogan from the car before she suffered any burns. Police later charged her with driving under the influence of a narcotic analgesic and cannabis, as well as driving on a suspended license.

It took firefighters three days to contain the fire, which also destroyed one residence and a garage. Before they controlled the blaze, Cal Fire ordered residents of the Willow Valley Subdivision to evacuate their neighborhood.

While Hogan will face charges of DUI under the state’s vehicle codes, Cal Fire is filing its own charges against her. They include unlawfully causing a fire which causes an inhabited structure to burn; seven counts of unlawfully causing a fire of a structure or forestland; and one count of committing a violation during a declared state of emergency.