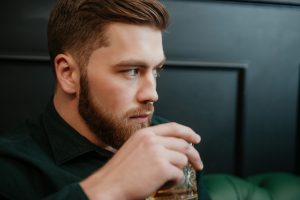 We get into cabs today to keep ourselves from driving when we’ve had too much to drink—so it might seem a bit ironic that the first person ever to be arrested for driving under the influence of alcohol was a cabbie. According to history.com, a London cab driver named George Smith slammed his taxi into the side of a building on September 10, 1897. He was arrested for drunk driving, pled guilty and was fined 25 shillings for the offense.

Many sources cite a 1910 New York law as the first official law on the books regarding DUI. However, New Jersey actually beat its neighboring state to the punch, in a set of legislation passed in 1906 regarding the registration and use of motor vehicles, with this simple phrase: “No intoxicated person shall drive a motor vehicle.”

Violation of the New Jersey statute meant a fine of up to $500 (a huge sum at that time) and up to 60 days in jail. The New York law was even stricter, with fines up to $1,000 and up to a year in jail. However, neither law went so far as to specify a threshold or benchmark for identifying someone as “intoxicated.”

The repeal of Prohibition in the 1930s raised new concerns about intoxicated driving and ways to determine legally whether someone had had too much to drink. Necessity being the mother of invention, an Indiana scientist named Rolla Harger began working on a device that would measure the alcohol on a person’s breath. His “Drunkometer” was officially patented in 1936, and according to Wired, police officers first used the device successfully in 1938. (This device would be the precursor for the more modern breathalyzer, invented by Robert Borkenstein in 1953.)

Once we had devices to measure the content of alcohol in a person’s blood (BAC), the natural next step was to determine a benchmark at which point a person was considered legally intoxicated. The National Safety Council teamed up with the American Medical Association to propose a generous standard intoxication threshold of BAC 0.15 percent, which became the general accepted norm from 1938 onward. Over time, these standards were gradually lowered by some legislatures 0.12 or 0.10.

Beginning in the early 1970s, as more and more vehicles were filling the roads (many operated by intoxicated drivers), state and federal legislatures began enacting stricter rules and stiffer penalties for DUI. One of the most notable changes was the implementation of the “DUI per se” standard.

Previously, police prosecutors had to prove a certain BAC level to secure a conviction, and demonstrate that the presence of alcohol had affected the driver’s cognitive abilities—a vague proposition at best. With “per se DUI,” officials only had to prove that the defendant had a BAC above the legal limit while operating a vehicle.

No history of DUI would be complete without mentioning the impact of Mothers Against Drunk Driving (MADD) on shaping public opinion and legislation regarding DUI in modern times.

Even with legal DUI standards in place since the late 1930s, for many decades, most of the public were either unaware or uninterested in the dangers of driving while intoxicated—and law enforcement were frequently lax in enforcing the rules that did exist.

That reality changed in 1980 when Candy Lightner’s 13-year-old daughter was killed by a drunk driver with three prior DUI convictions. The tragedy prompted Lightner to establish Mothers Against Drunk Driving, and the resulting movement quickly gained national attention. MADD raised public awareness and put great pressure on government officials to enact tighter restrictions and punishments for violators. Many of the resulting changes in legislation came as a direct or indirect result of MADD’s influence. Some of these changes include:

• Implementing a nationwide standard BAC of 0.08
• Raising the legal drinking national age to 21 (some states had it as low as age 18)
• Implementing stiffer penalties for violators, including jail time, fines, restitution and license suspension on the first offense.

Are the Laws Working?

With public opinion now staunchly opposed to driving under the influence (despite the fact that many still do so), violators may face deep public scrutiny just for being arrested, and sometimes the loss of a job in the event of a conviction (especially if the job involves driving)—addition to fines and penalties for the conviction itself. These facts raise a couple of questions: 1) Have DUI laws become too strict? and 2) Are the laws truly effective? Let’s address both questions.

Are DUI laws too strict?

Have law enforcement officials become so focused on DUI that people are being wrongly arrested? Do the laws really have to punish offenders that severely? What about the legal limit of 0.08? Some people don’t lose cognitive abilities at that level; is it unfair to arrest them?

For context, consider that our 0.08 BAC level is actually among the most generous in the world. Many nations have dropped this standard down to 0.05 or even 0.01. With trends moving downward instead of upward, it’s highly unlikely we’ll see a raising of the legal limit—most likely we’ll see it lowered even more. In addition, while breathalyzers do yield some “false positives” now and then, a breathalyzer test result isn’t admissible in court, so it can’t be used to convict someone of DUI. Blood and urine tests are more accurate, and these provide the courts with evidence to convict—so even if you’re wrongly arrested, the charge isn’t likely to stick unless you were genuinely above the legal limit.

How effective are the stricter laws?

To answer this question, we need only look at the numbers. As The Fix reports, the number of alcohol-related fatalities in 1982 was 26,173. In 2009, under much stricter rules, that number was 12,744—a drop of more than 50 percent. When you factor in how many cars and people are on the roads now, compared to the early 1980s, you realize the percentage of alcohol-related deaths has dropped much further since stricter laws came into play.

DUI laws have evolved greatly since motor vehicles were first invented; they may seem strict and even intimidating at times, but the numbers don’t lie—these laws are making our roads safer. If you find yourself charged with a DUI and need legal representation, please call our team. We’re here to help.