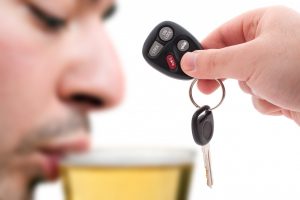 Driving under the influence can lead to some strange occurrences—none of them working in the driver’s favor. At the time of this writing, we’re only three-and-a-half months into 2019, and already we’re hearing reports of DUI cases ranging from the ironic to the unbelievable. Let’s explore a few of the most bizarre DUI stories of the year to date, and see what we can take away from them.

In early March, witnesses say a 37-year-old man from Coeur d’Alene, Idaho, drove his vehicle twice off a boat launch onto a frozen lake. On the second time, the vehicle broke through the ice and sank. Law enforcement arrived on the scene to see the man walking off the frozen lake in wet clothes while his vehicle disappeared under the surface. The man, John W. Hamilton, was arrested on suspicion of DUI. He claimed he was alone in the car when the ice broke, officials tested the site via sonar to verify that no one else was stuck in the car. Deputies estimated the vehicle was on the lake floor 17 feet below. Not only does Hamilton face DUI charges, but his vehicle will likely not be retrieved until later in the spring when the ice has melted.

Key takeaway: Driving under the influence affects your judgment in ways that may endanger you, even if you aren’t endangering anyone else. Officers say Hamilton was lucky to have escaped his vehicle alive and uninjured.

On an early Sunday morning in February, as USA Today reports, California Highway Patrol pulled over a vehicle that had been weaving across three lanes of traffic on a stretch of I-80 in Berkeley. On the top of the car was a visible sign that read, “I should probably get a ride home.” “Buzzed driving is drunk driving.” Officers arrested the man on suspicion of DUI, who was found to have a BAC count well above the legal limit.

So why display a sign warning against DUI? For money, suggested officials. The NHTSA pays drivers to display these signs on their vehicles.

Key takeaway: Displaying an anti-DUI message doesn’t preclude a person from making an error in judgment.

In April 2019, James Knapp, 21, of Redding, CA, drove his SUV into a power pole, causing downed power lines, a small grass fire and localized power outages. When police arrived on the scene, Knapp told them he had been Snapchatting with his girlfriend at the time of the accident. Officers apparently suspected more based on the circumstances and the man’s condition, and they arrested him on suspicion of DUI. A dog was also rescued from the crashed vehicle and turned over to Animal Control.

Key takeaways: DUI is against the law. So is using a cellphone while driving. Combining the two activities amplifies the danger considerably. Also, we don’t know whether the suspect used the Snapchat story as an attempt to divert the officers’ attention away from DUI, but that tactic will not work. Don’t attempt it if (heaven forbid) you find yourself in the same situation.

In March 2019, a 24-year-old Memphis woman allegedly left a bar, got in her vehicle, and began to drive. Shortly after, she plowed into the back of a police car with its emergency lights flashing. The officer was pulled over on a separate traffic stop when the accident occurred. The suspect reportedly smelled strongly of alcohol and was arrested on suspicion of DUI.

Key takeaway: If you need proof that alcohol affects a person’s judgment and coordination, this story is a clear indicator. Not even a police car with emergency lights was enough to steer this driver clear of an accident.

Last month, as reported in the New York Post, a group of onlookers in Brooklyn, NY chased down and caught a DUI suspect after he crashed his vehicle into multiple cars parked along the street, narrowly missing several pedestrians in the process. The onlookers gave chase when he attempted to escape on foot, but they tackled him and held him down until the police arrived. Not until they apprehended him did the Good Samaritans discover the suspect had a loaded gun, which he had dropped in the process. Upon searching his vehicle, police discovered marijuana and an open container. The suspect faces multiple charges, including DUI, reckless endangerment and criminal possession.

Key takeway: Be vigilant, but leave enforcement to the police. This story ended well, but it could easily have gone a different direction. While attempting to be good citizens, these civilians inadvertently put themselves in harm’s way.

In March 2019, sheriff’s deputies in Spartanburg County, South Carolina, pulled over a vehicle that passed them at a high rate of speed and swerved into the opposite lane. As the police approached the vehicle, the suspect allegedly sprayed Axe Body Spray into his mouth, supposedly to cover the scent of alcohol on his breath. Not only did the body spray fail to work, but officers also discovered a twelve-pack of beer with eleven of the containers open, and ten of the beers nearly empty. Needless to say, the man was arrested.

Key takeaway: Masking the scent doesn’t work. At DUI levels, the alcohol smell often comes through your pores, not just from your breath. Additionally, officers know what other evidence to look for.

If you have been arrested or charged for DUI, we can provide needed professional legal guidance and representation. Call our offices for a free evaluation.